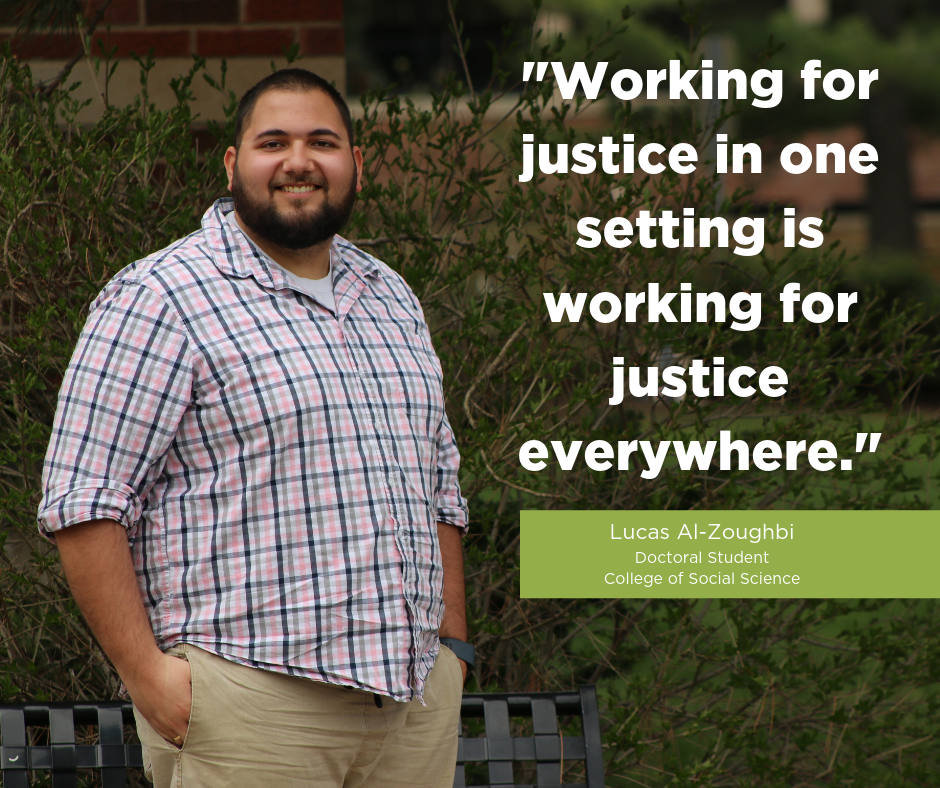 Lucas Al-Zoughbi is a doctoral student in the Ecological Community Psychology program in the College of Social Science at Michigan State. Lucas grew up in Palestine with a childhood that was shaped by military occupation. He shared very vulnerably how his experiences shaped the work he is committed to pursuing in graduate school. One of the strongest resonating realities for Lucas growing up was a lack of basic human rights. Israel made it illegal for him to visit his relatives s that lived only 11 miles away. He experienced direct violence such as raids on homes and friends and relatives killed. All this was on top of structural violence like drastic water limitations. Lucas was recently married in Bethlehem at the Nativity Church but was fraught about his mother who had been denied re-entry multiple times being able to attend. However, after months of advocacy and organizing, they were able to secure entry for his mother to attend the wedding. He grew up in the context of military occupation and now is motivated to work for justice especially in Palestine as he hopes to return after completing his studies.

His move to the United States came in High School and later studied Peace Studies Psychology at Manchester University. There he learned about utilizing nonviolent social change to disrupt power and systems of oppression. The program exhibited values of social justice and equity as well as responsibility for working on in ways that positively impact “the collective us”. All this led Lucas to MSU’s Ecological Community Psychology program. As a University Distinguished Fellow, Lucas works with Spartans like Dr. Ignacio Acevedo and Cris Sullivan.

Lucas’ scholarship relates directly to Palestinian youth and needs assessment. He hopes his work will help promote justice in the region of Palestine, so that someday people like Lucas and his spouse can live in Lucas’ hometown and have a life of dignity, which includes human rights, civil rights, economic stability, and ability to move throughout the region; things we often take for granted. Living in a state where the population is three times that of the West Bank, a small location whose inhabitants experience collective and intergenerational trauma of tear gas, neighborhood raids, and bombings, is surreal for Lucas. He hopes to “work toward a world where justice is the foundation of peace. Not just a lack of violence or resistance, not the systemic exploitation of humans, resources… work for positive peace where everyone experiences life satisfaction, justice, and lives without fear.” Lucas hopes to “work himself out of a job.”

His interests aren’t limited to Palestinians. In fact, Lucas shared that the highest cause of Israeli soldier death is suicide. While he has experience with a person-to-person approach in a youth conflict transformation program, Lucas says this doesn’t address the structural oppression present in any of the systems. Despite this, Lucas is inspired by the connections that have been built across struggles and liberation movements. One such example is the relationship between native and black struggles for liberation and the solidarity that has come up from #BlackLivesMatter to #ProtectMaunaKea. After the police responded with tear gas and rubber bullets to the protests against the killing of Mike Brown in 2014, Palestinian activists were tweeting about how to deal with tear gas. This is a small example of the growing interdependence and solidarity across the globe in struggles for liberation. Lucas says, “working for justice in one setting is working for justice everywhere” and that is what he is doing.