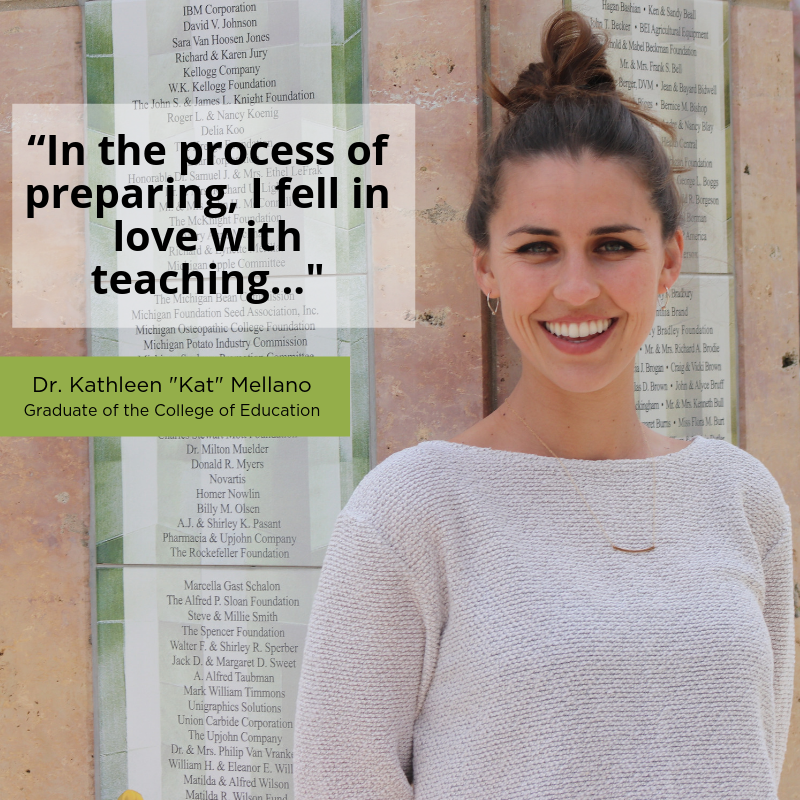 Kathleen “Kat” Mellano is a recent graduate of the Kinesiology doctoral program in MSU’s College of Education. She decided to develop herself as a scholar specializing in sports psychology because she earned her Bachelor’s degree in psychology while being a collegiate athlete. After seeing examples of what not to do as a sports psychologist, Kat completed her Master’s degree. To prevent herself from having limitations in her future, she decided to go all the way to her Ph.D. and came to MSU because it has the best program for her area of study.

Throughout her time at MSU, Kat pursued a variety of experiences to round out her perspective as a scholar and practitioner. She conducted research, had applied experiences, and prioritized teaching. “I did everything I could do to be a good teacher,” she said. From extra classes to professional development, Kat tried to become the best version of herself and meet all the markers for being a good educator. “In the process of preparing for teaching, I fell in love and forgot about the possible accolades,” explained Kat. That said, her efforts paid off and Kat was awarded the “Excellence in Teaching Citation”.

The thing that Kat values most in the entire world, is her family and she describes herself by talking about the other important people in her life. She is a sister, daughter, and wife. When it comes to her parents who both have doctoral degrees, graduate school was always expected of her. But that expectation didn’t mean Kat doesn’t have tons of fun with her family. She describes her mother as the “mom version of Mary Poppins” (a person she would love to grow up to be like) and said, “being my Dad’s daughter is fun”. She has a sister and two brothers and is the youngest of the family. Her recent wedding made her “feel like a princess” a status that her husband reinforces on a regular basis. Kat shared that her childhood in an agricultural community shaped her values and have helped her appreciate the added depth in the way she perceives things. She says it's her experiences with her family and teachers growing up that have influenced her style as an educator. “Someday I hope someone looks back on their experiences with me as a friend, teacher, colleague, and they say ‘yes she made a mark on my life in some way”.”

Kat describes herself as a “Mover”, someone who really values the ability to move and aims to do so whether inside or outside. For Kat, being a mover ties to so many things. On one hand, being a mover feeds her desire to see the world. In 2018, Kat was awarded the College of Education’s Fellowship to Enhance Global Understanding (FEGU) which allowed her and a small cohort of other awardees traveled to China. She is a mover in the sense that she physically has to move every day. From marathons to triathlons, Kat tries to be as active as her life allows. Lastly, she shared that she literally moved across the country five times. From her family home in California to Texas, then to Ohio and Michigan. She is now in Massachusetts working in her first faculty role, all while her husband is working on contract in Florida. Kat says she, “values this opportunity, but wonder if some time that part of my mover identity will settle.”