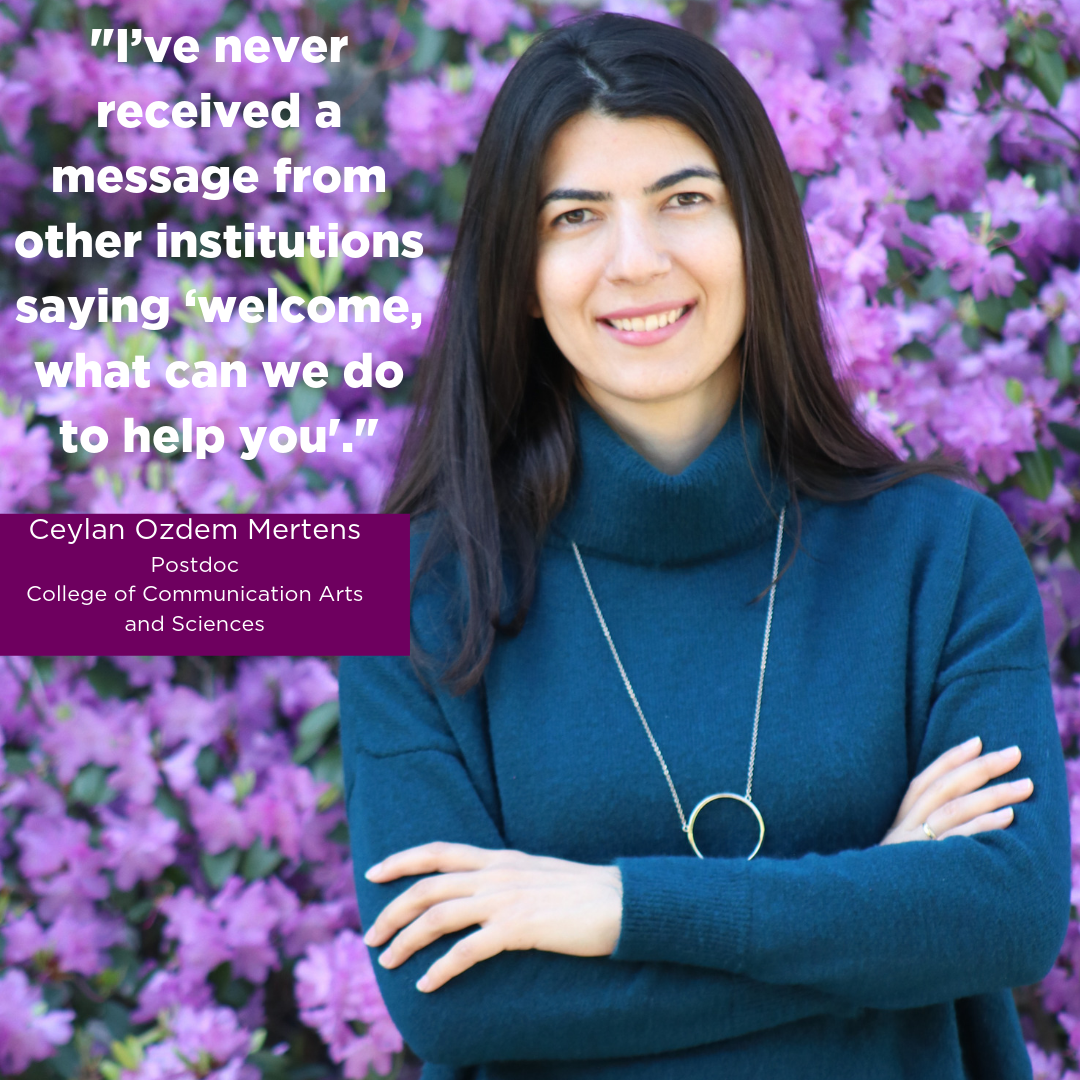 Ceylan Ozdem Mertens is a Postdoc at Michigan State University, working in the College of Communication Arts and Sciences.  According to the National Science Foundation, a ‘postdoc’ is “a temporary position awarded in academe, industry, a nonprofit organization, or government primarily for gaining additional education and training in research.” Ceylan specifically investigates the parallel processing between drug addiction and social media addiction. While there is no official terminology to characterize excessive social media use in the field of psychology, Ceylan has designed and conducted an experiment to analyze individuals’ decision making patterns which are correlated to their reported social media use and phone-reported screen time. She’s in the process of analyzing the results of her work but is confident that her findings will be a new contribution to existing scholarship.

Ceylan is a world traveler. She completed her Bachelor’s degree in her home country of Turkey before she traveled to Germany for her Master’s and Belgium for her Ph.D. Her doctoral work was at the intersection of social psychology and neuroscience, which eventually lead to her interest in social media, fake news, and online learning. When she saw the postdoc job posting at MSU to do research on the brain and social media, she knew it was for her. Despite all her travel, Ceylan says she doesn’t consider herself very adventurous- except when it comes to changing locations, which she tends to do every couple of years.

When she moves to a new place, Ceylan doesn’t do any research in advance. She noted that many things about new places could cause her to be fearful so instead, she prefers to be surprised. When she got her position at MSU, her move to East Lansing was no exception. She rode the Michigan Flyer into town, noting how rough the roads were and comments fellow passengers made about how cold Michigan winters are, but her Belgian husband (who now works at the University of Michigan) was able to move with her and he enjoys the MI microbrew industry.

Regardless of a somewhat unexpected start, Ceylan shared that she has found her time at MSU to be very fulfilling. She even went as far as to say she wished she had completed her Ph.D. here because of all the professional development workshops offered by the Graduate School. For Ceylan, this is evidence that MSU cares about its students and want to make sure they have a voice; an aspect of her graduate experience that was missing. As she transitions between a graduate student and a faculty member, she appreciates the social community that exists at MSU and has found the Postdoc Association to be a great place to find caring people and network with other professionals. Before coming to the U.S., Ceylan notes that there were some English words that just didn’t resonate with her, such as “diversity”. After coming to MSU, she has realized the importance of diversity and notes that while many people feel MSU is not diverse enough, “this is the most diverse place I have ever been.” Exposure to various racial/ethnic identities, cultures, ideas, and other international students has been a huge plus of Ceylan. “I’ve never received a message from other institutions saying ‘welcome, what can we do to help you’,” she says.

When it comes down to it, Ceylan just wants to be respectful of others. She tries to help people feel more confident by stressing their strengths in certain areas, but always feels that if someone asks her for a critique she wants to provide constructive feedback so they can continue to grow. People reach out to Ceylan from her previous homes to ask questions about academics and she always tries to advise them. One platform she uses to do so is a YouTube channel where she discusses articles and debunks myths about the brain. “If I reach one person,” Ceylan says, “then it is a success for me.” In the future, she wants to start a scholarly-practice based “behavior change lab” where research informs the approach “not for science, not for research, but for people” says Ceylan. Using everyday support to help people change their behavior is a new method of psychological consultation that she imagines will be at the core of her lab.