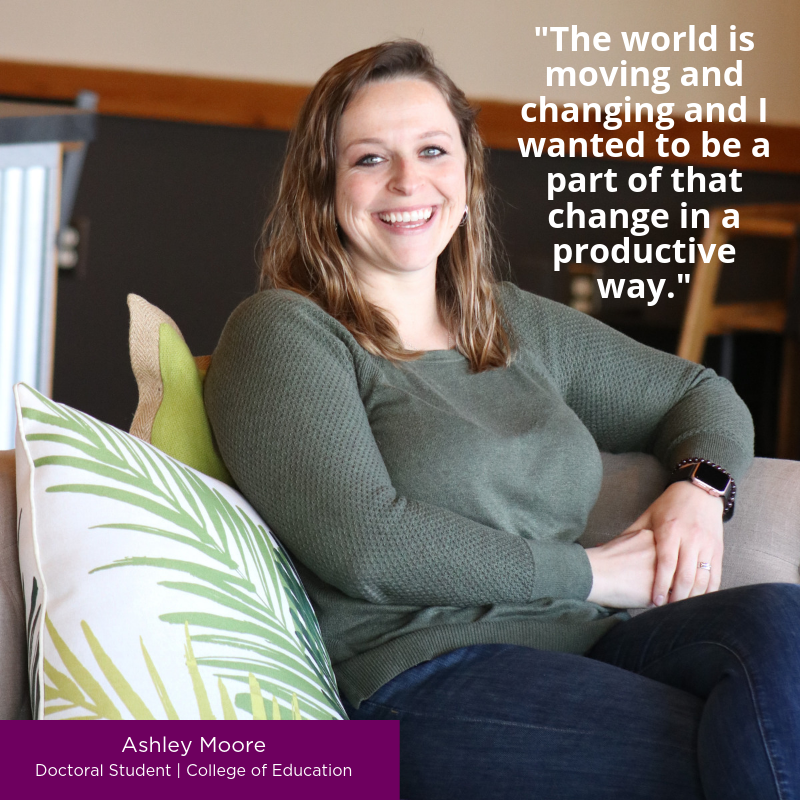 Ashley Moore is first and foremost a teacher, which, she says, also inherently implies that she is a lifelong learner. Her identity as a teacher and learner guides everything else about her life, and it is her constant need to improve upon herself to be the best version of Ashley she can be that brought her to pursue her doctoral degree. She is now studying Curriculum, Instruction, and Teacher Education (CITE) in the College of Education at MSU. “Being a teacher is a way for me to feel connected to other human beings in meaningful ways,” says Ashley.

Before pursuing her Ph.D., Ashley earned her Master’s degree in Spanish Literature and Linguistics and taught Spanish. It was then that she realized how great teaching is and really enjoyed being able to connect with students over language and culture. “The world is constantly moving and changing and I wanted to be a part of that change in a productive way,” she said. Ashley was living and working in the Greater Lansing area when she decided to apply to graduate school. MSU’s CITE program is highly ranked, so Ashley decided that if she got in, it was meant to be. She says being in graduate school at MSU has challenged her in more ways than she could have imagined, but she feels more herself than ever before.

“Being around colleagues who know and do social justice as more than just a buzz word” is something Ashley especially appreciates about her program and experiences. She finds that being part of a community is one of the most important keys to happiness, both personally and professionally. One such experience Ashley has had was being the President of the Council of Graduate Students during one of MSU’s most tumultuous times in history. Ashley said this experience helped her learn what it means to lead in the interests of others ahead of her own personal ideas.  Additionally, Ashley was a facilitator for the MSU Race Dialogues. This experience helped her practice how to have productive dialogues across difference, interrupt bias, throw your plan away, and have difficult conversations. Personal experience with not feeling seen or heard solidifies Ashley’s commitment to fighting for human beings around the world with marginalized identities. “We have to do everything we can to validate that people matter and fight for that- make space for that. Before anything else,” she says. Between COGS and the MSU Race Dialogues, Ashley says she has “really worked to use my words for good. I try to be very intentional about that and I fall short in all sorts of ways all the time, but then I reset it... Sometimes I think that it's necessary to call things out. So when I say ‘being truthful and productive with the things that I see’, that doesn't mean being passive to me. It means acting in alignment with my values.”

Ashley is completing her doctoral degree using her responsibilities as a white teacher-educator as her guide. She uses her position with teachers-in-training to help them think about whose voices are centered and whose are not in curriculum. Part of that is facilitating conversations with future teachers about how to be "a better co-conspirator and ally," she says. For Ashley, her Ph.D. program isn’t her whole life and she doesn’t think it should be. Life doesn’t get put on hold just because of graduate school. When Ashley’s father unexpectedly passed away during the third year of her program, the joy and sense of belonging she finds in teaching are what got her through. For her, teaching is mutually humanizing. “I’m real with them and my students share personal details of their lives with me. We’re open and honest, and it really means a lot.”