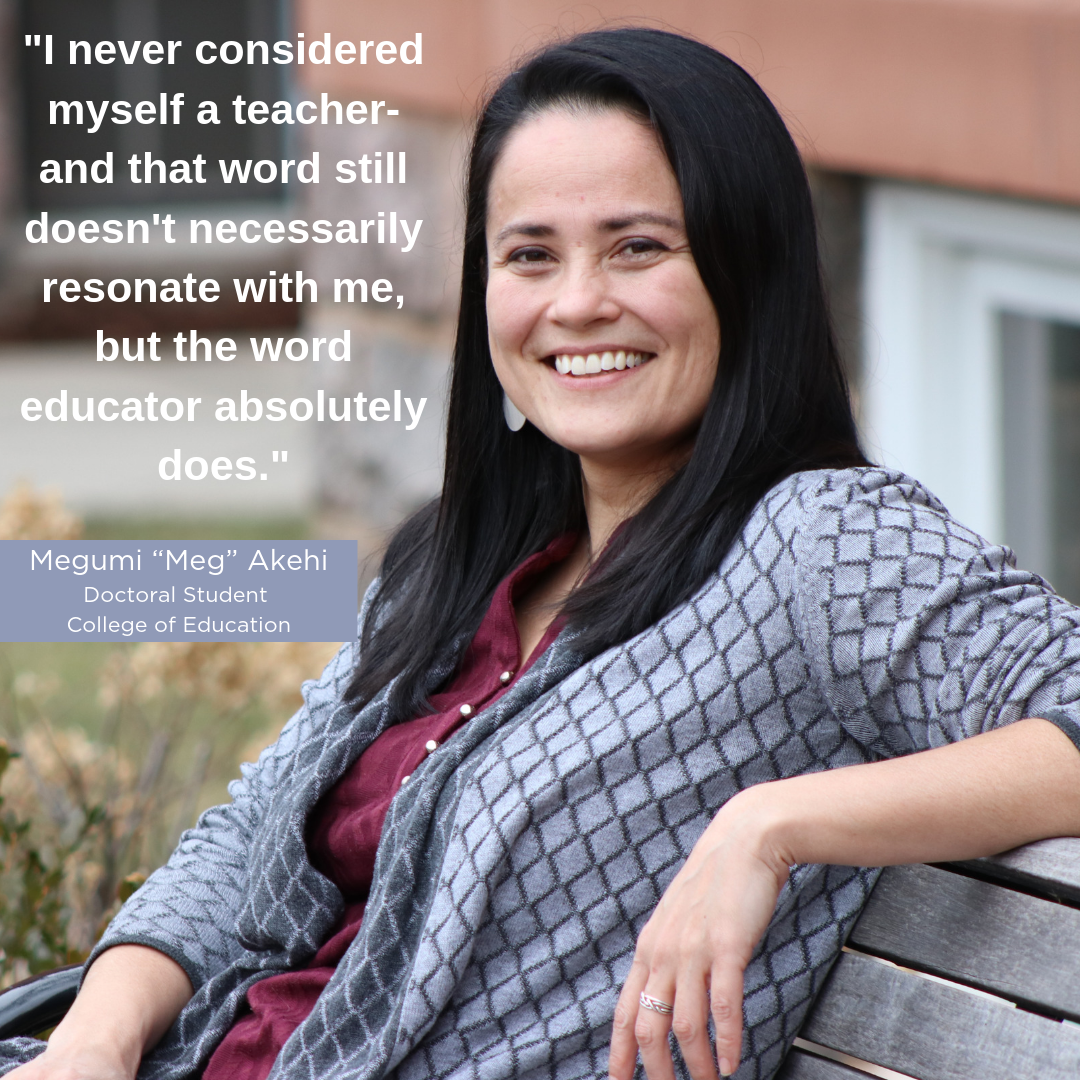 Megumi “Meg” Akehi has taken a less traditional route to get to her doctoral degree than many other graduate students. Meg’s father was an immigrant who came to the U.S. for his Master’s degree. After getting married in Japan and moving back to the states, Meg says there was always an unspoken expectation that she attend college. She was working on her Bachelor’s degree and worked in the summer as a second-shift assembly-line worker. Her experiences working in that setting helped her realize that while college was the expected “next step” for her it isn’t the case for everyone. Meg decided to study psychology because she found it inherently interesting.

After graduating Meg worked for 13 years in an organization that she was a part of as a student. She found herself drawn to activities that would help people grow such as leading workshops, being a helping agent in peoples’ lives, and building community. In that time she decided counseling would be a good next step for her and she returned to college to earn her Master’s degree in counseling. “My heart is so drawn to academic experiences - that being in higher education is a place for me,” said Meg. After dabbling with non-profit consulting and working at Starbucks, Meg decided a Ph.D. would be a positive and attainable move.

It wasn’t until she attended an emerging adulthood conference that Meg felt like she knew what field she wanted to study. She says, “I like learning for its own sake. It's certainly not only a means to an end of productivity or job attainment. I do just like playing with ideas… I don't even know if I, at that point, could have made the connection between therapy and activities I was doing that were more mentorship related, but I started to realize that this idea of ‘I like helping people grow’ and I would find myself leading workshops or trainings or doing things. So I never considered myself a teacher. And that word still doesn't necessarily resonate with me, but the word educator absolutely does.” Meg is now a doctoral student in the Higher, Adult, and Lifelong Education program in the College of Education at MSU.

Now, Meg is working on research that has identity at its core. She notes that when she finishes, she’ll have a terminal degree in a field she has never worked in, so she feels lucky to have had assistantships that were all administrative in nature- helping her discover how to translate her skills from previous careers into a new setting. Meg says other experiences have also played a dominant role in shaping her experiences at MSU. Meg worked for Graduate Student Life and Wellness in a role that exposed her to a lot of graduate student opportunities for professional development. She believes that the Graduate School at MSU offers “some really great things” that because of either siloing, values, or lack of awareness, graduate students aren’t taking enough advantage of. Now Meg is balancing her programmatic expectations with those of her job at MSU’s Counseling and Psychiatric Services (CAPS). While she doesn’t know where the future will lead her, she is excited and hopeful about the kinds of work she’ll be doing and the impacts she’ll make in helping organizations be supportive of their people through growth and policies.