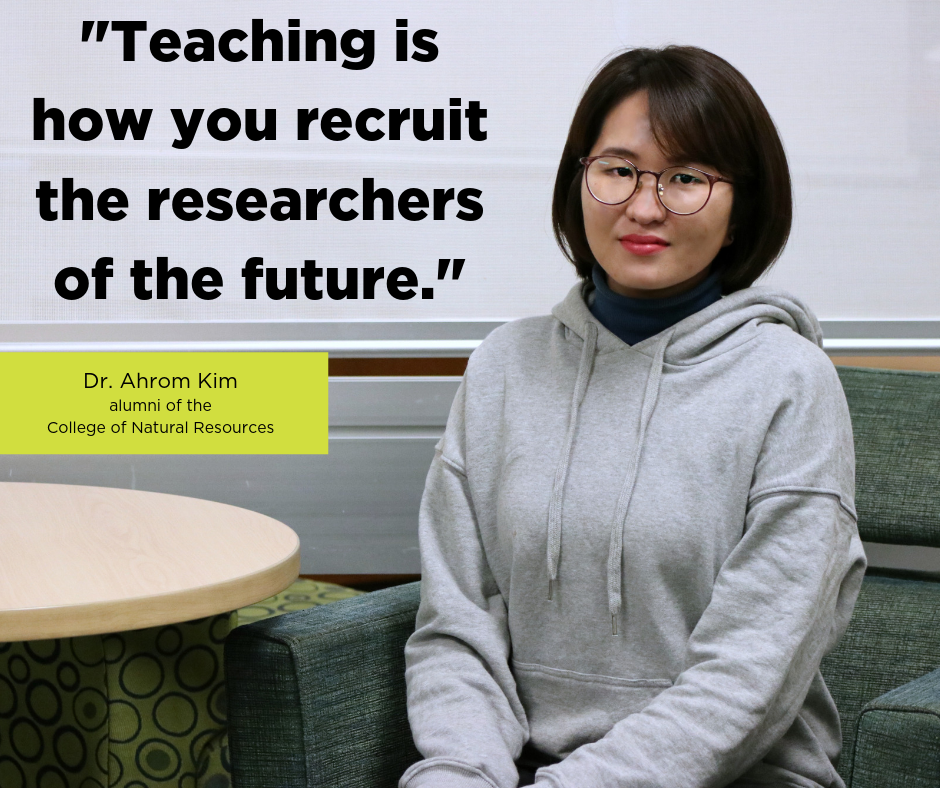 Ahrom Kim is a doctoral candidate in the Microbiology and Molecular Genetics program in MSU’s College of Natural Sciences. Ahrom is an international student from South Korea. She had early experiences in the United States during elementary school while she was here with her Father who was doing a Postdoctoral research. Her family moved back to Korea, but she always had the goal of coming back to the States for education. When she was in high school, she made that move by herself! She notes she applied to MSU because she wanted to attend a school with greater diversity. She said MSU was such a place “because the school is big but the majors are really specific”. After taking an immunology class, she fell in love with the subject and while she expected to go somewhere other than MSU, in the end, the familiarity with the place and the people won her over. “Graduate school is hard, so why make it harder on yourself,” she says.

Originally, Ahrom describes her participation in a Ph.D. program as aimed at “getting a degree and getting out for a job.” Ahrom’s father wanted her to go to medical school and when she decided that wasn’t the path for her, she was cut off financially. This meant that financial support was imperative for Ahrom. “I always thought I’d go work in to industry and make tons of money,” she said, but now Ahrom sees herself as an activist about diversity and education. She believes that people need to fight for the way that graduate students are treated during their programs, and the idea that research, not teaching, comes first – should be challenged.

During her undergraduate experience, Ahrom didn’t get the type of education that she expected. She learned quickly that personal interaction with the teacher was important especially in the face of large class sizes and lectures. When she got to her graduate program, she had already had teaching experience in Korea, and while her program required that she be a teaching assistant (TA), Ahrom thought of teaching as “time out of the lab”. “But it was a requirement and I was getting paid, so I thought I should do a good job,” she says. She used her likes and dislikes with TAs during her undergraduate to try and be the TA she had always wanted as a student. When people started telling her she was good at it, she started to feel rewarded in the work. “The more I [taught], the more I fell in love with the educational parts of [high education].”

Ahrom was a Future Academic Scholars in Teaching (FAST) Fellow which according to the program description, gives graduate students opportunities to have “mentored teaching experiences and to gain familiarity with materials on teaching and assessment techniques”. This supported Ahrom’s love of teaching and helped her learn how to integrate scholarship into her practice to have an informed teaching approach. Ahrom believes “teaching is how you recruit the researchers of the future,” and if people dislike teaching “it is because [they’re] doing it wrong.” Ahrom has accepted a lecturer position at Auburn University in Auburn, AL, where she will teach Immunology and Cell Biology.